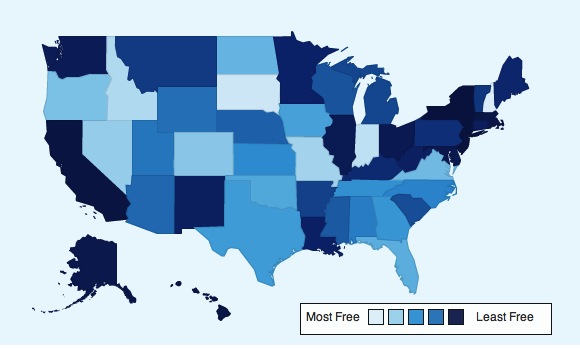 The Mercatus Center at George Mason University has updated their Freedom in the 50 States ranking.  First debuting in 2009, the study “ranks the American states on their public policies that affect individual freedoms in the economic, social, and personal spheres.”

There were a few surprises with New Hampshire ranking #1 and some that were expected with New York ranking #50.  Alabama made the top 20 coming in at #19.  Here’s what they had to say about us:

Alabama does much better on economic than personal freedom, as one might expect from a highly socially conservative state. Nevertheless, Alabama does well on some personal freedoms, such as smoking bans, cigarette taxes, and gun control. Alabama has a strangely restrictive alcohol regime, with the second-highest beer taxes and highest spirits taxes in the country. In addition, Alabama’s marijuana laws are unusually punitive: A three-year mandatory minimum sentence exists for all marijuana cultivation or sale convictions, by far the highest in the country, and the maximum sentence for a single cultivation or sale conviction is life in prison. Furthermore, Alabama’s court system is one of the worst in the country according to the Chamber of Commerce survey.