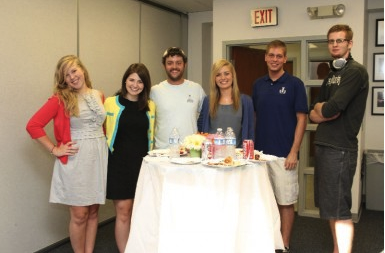 Last year, over 200 students from all over the country attended our free, 2-day Summit in Washington, D.C. Space is limited, so we want you to be the first to know! We also want to let you in on an exciting and valuable opportunity.

In addition to the summit being free of charge, Eagle Forum offers a limited amount of travel & lodging scholarships to a handful of select students who are enthusiastic and personally involved in the conservative cause on their campus or in their classrooms.

Have you marked your calendars for our 18th annual Collegians Summit yet? What are you waiting for?

The Huntsville Times reports on an Eagle Forum of Alabama fundraiser with Phyllis Schlafly:

“I hope it’s going to be like 1994, when we had the biggest Republican victory of our time,” said Schlafly.

Schlafly spoke at The Ledges before a fundraiser for Eagle Forum, a conservative, pro-family group Schlafly founded in 1972.

Without mentioning the Alabama races specifically, Schlafly said two congressional districts in the state could be captured by Republicans. The GOP has criticized freshmen U.S. Reps. Parker Griffith, D-Huntsville, and Bobby Bright, D-Montgomery, since their close wins last year.

Schlafly said conservatives are emboldened by policies of President Barack Obama. She criticized federal spending and Obama’s push to include a public insurance option to health care reform.