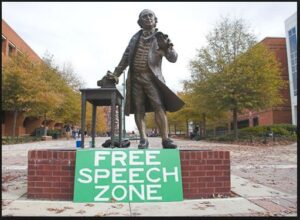 Eagle Forum of Alabama is proud to endorse House Bill 498, the Alabama Campus Free Speech Act. The bill is sponsored by Rep. Matt Fridy, R-Montevallo, one of the strongest voices in the Alabama legislature in support of individual liberty and our Constitutional principles of limited government. Historically, Alabama’s public institutions of higher education have embraced a commitment to free speech and expression. The freedom to respectfully debate opinions and ideas with those with whom we disagree is a bedrock principle of American liberty. Public universities have been called “peculiarly the marketplace of ideas” because of their unique place in the development of the hearts and minds of our Republic. However, in recent decades, universities around the country have seen the erosion of this cherished freedom through ambiguous or overbroad policy codes, erroneously titled free-speech zones, and an inability of the university administration to protect and uphold these rights on campus.

It is a matter of statewide concern that all public institutions of higher education provide adequate safeguards for the First Amendment rights of students. This bill will empower Alabama public university administrators to ensure that their campuses promote free, robust, and uninhibited debate and deliberation by students and faculty across the state of Alabama. The bill will accomplish this in three ways. First, it will eliminate overbroad and ambiguous speech policies that infringe on expression protected by the US and Alabama constitutions, checked by constitutional limitations. Second, it will eliminate Free-Speech-Zones. And third, it will empower the universities to protect free expression by members of the campus community from unlawful violations by other members of the campus community.

No issue is more important to Eagle Forum, or to America, than education. The growing threats to liberty of thought and expression in our public university systems are only the most disturbing symptoms of a more general decline in American education. Eagle Forum President Eunie Smith says, “America’s founding values cannot survive unless they are taught in our schools at every level.” Protecting freedom of speech at Alabama’s public colleges and universities is a first step in the direction of a much-needed revival of American education. Eagle Forum of Alabama stands strongly behind HB 498 and calls on the citizens of this great state to support this timely measure.