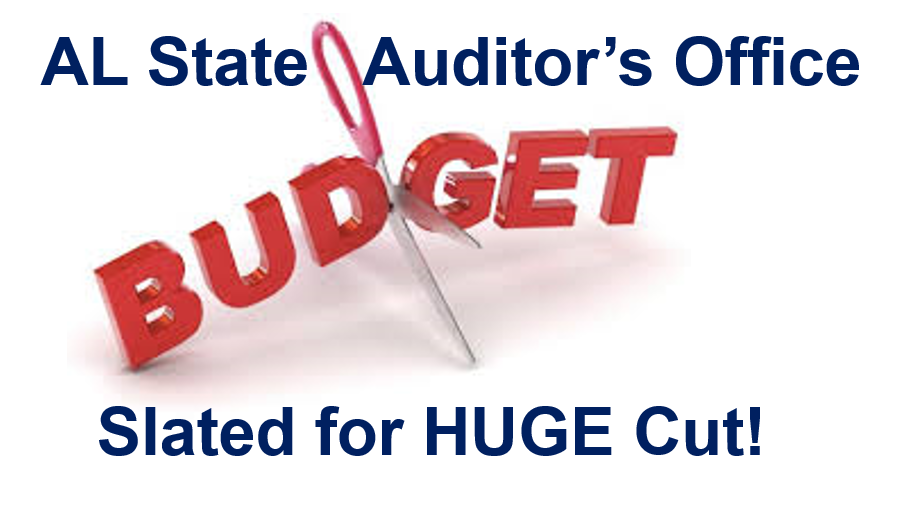 The Senate General Fund Budget Committee is proposing the budget for 2021FY.  One of the offices that was singled out for a massive decrease was the Alabama State Auditor.  This agency’s budget for the coming fiscal year was slashed by about 46%, the biggest percentage by far.  Most agencies stayed the same as last year, i.e.”level funded”.

The State Auditor is a constitutional office and he/she is elected by the people of Alabama. The function of the office is to completely audit the millions of tax dollars invested in the equipment and vehicles used by state employees in the course of their work. This office has played a vital role in exposing the state’s misuse of taxpayers funds and projects. It is crucial to keeping our state government agencies accountable and transparent to the taxpayers.

This almost 50% draconian cut in the Auditor’s already lean budget of only $950,000/year will basically render it inoperative.  Three out of six existing staff will be laid off and 176 state agencies will not have their state property inventoried. Due to 28% budget cuts under the previous administration, the office has already laid off five of its staff.  Despite this cut, the State Auditor’s office received a perfect audit by the State Examiners.  Bringing the budget to a mere $500,000/year will prevent the office from performing in accordance with good practices.  The reduced budget barely covers the cost of the software and equipment needed to perform audits let alone the modest salaries of the few employees it does have. The proposed General Fund Budget has an increase of about $167 million over last year. Surely there is a way to prioritize in order to adequately fund the essential service to taxpayers provided through the Auditor’s office.  We request that you carefully examine this issue and vote to “level fund” the budget for the State Auditor’s Office in line with most other agencies of the state.

This time, when trust in government may be at an all-time low, is no time to strip a Constitutional office of its ability to provide accountability to Alabamians.

WHAT CAN YOU DO: Because the Senate is reconvening on Monday, May 4th to vote on the General Fund Budget, we need everyone to act quickly.

Thank you for making a difference.  God bless!